News flash two - The real traffic has been found to be quite low. MSMbot was confounding the reports.


5'th May 2008,
Nerdipedia.com and .org are addon domains on my main site which is http://eddiem.com.
I am (now was) hosted on a shared server by bluehost. The physical server is called box275.
Box275 is a quad core linux box.
Box275 hosts about 500 domains, five of the domains are mine. I hear a server typically hosts around 400 users.

Box275 has been having problems lately. Somebody or something periodically hogs the CPUs and the server gets very slow or goes offline altogether. There has also been downtime while they rebuilt the file system.

On the 2'nd of May 2008 bluehost pulled the plug on eddiem.com for allegedly overloading the server. I've seen no evidence that this is true. My CPU-quota-exceeded logs are empty. We could certainly have spiked the load as several hundred users logged in simultaneously but I don't think I deserved to suspended over this.

Let us look at some bars graphs. 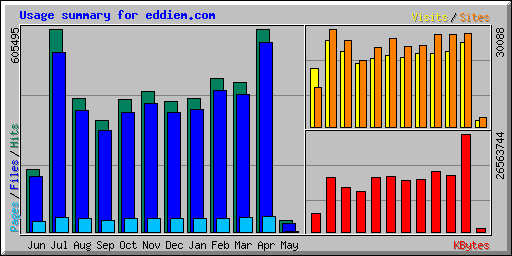 Above is a graph of the total usage for eddiem.com - this includes traffic to nerdipedia.
The nerds wiki was created in June-2008 and became Nerdipedia.com in early July.
You can see it was an instant hit as people downloaded Daniel's version of my sonar program.
My bandwidth usage increased by over two times and has stay high ever since.
We had an initial spike of several thousand users per day which settled down to 1000 or so.
Occasionally there would be a smaller spikes but never as large as the first - until now.

This is the eddiem.com usage for last month.
The spike on the 7'th is not exactly subtle.
This was from a link to one of my parafoil pages placed in a forum at http://blog.makezine.com/
A little more subtle is the increased traffic at the end of the month as traffic to Nerdipedia spiked. 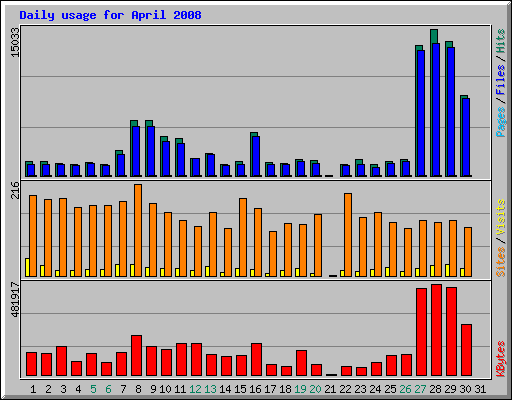 This is last month's usage for Nerdipedia.
You can see a slight increase from the makezine link. This is from people visiting my main site and clicking across to NP.
At the end of the month traffic increased substantially. I'm not sure why. There are no clues in the site refers. I'm not sure if this was a spike or ongoing traffic because we we're forced off-line to early to be able to tell.
Unlike earlier spike which were clearly traffic to Daniel's pages this traffic was largely to my stuff.
Daniels sonar page was still top but my FORTH and C# pages also had high traffic. The C# pages were very new which makes it even stranger.
One factor may have been our google page rank improved - I wasn't watching it but it has gone from zero to five in as many months.

One should never make predictions - especially about the future - Twain??


Without a functioning crystal ball it is hard to predict my hosting needs for the next year.
Currently I need about a Gig a day bandwidth and a few gig of storage.
I need PHP to run tikiwiki and ideally fantasico and cpanel.
I also need enough CPU power to handle several hundred users.

My shared bluehost has everything except CPU power.

If the end of May traffic was a transient spike BH will be good enough for the near future.
If traffic continues to climb as a think it will the site is in trouble.

Some options.
1 - Ignore the problem and if the site dies it dies.

2 - Disable the wiki to save the rest of eddiem.com

3 - Move NP to another shared account. This would cost about US$100 a year and wouldn't help NP very much but would stop eddiem.com being killed like it just was - I lost the main site, email and other wikis.

4 - Find a shared host with few users per CPU. This is hard to do as CPU quota is not something hosting companies advertise.

5 - Get a VPS (virtual private server). This might give you say 1/4 of a real machine for a few times the cost of shared host. Usually these are unmanaged a you have to know to administer them. For extra money you might be able to have this done for you.
VPS is I believe the best option at the moment.

6 - Get a dedicated server. This gives you one real server - again usually unmanaged.
The down side is the cost. Anything reasonable is over $70 a month.
A managed server might be $100
I think the cost is reasonable but a fair bit for a free information site with no income.

In general I dislike advertising but to be pragmatic adsense is the most practical way to generate an income stream. Most free high traffic sites sell add space to function.
I doubt donation buttons work and I don't want to sell stuff.. Neripedia mugs anyone..

It is impossible to predict what a add banner or button will earn.
I for one don't want to spend hours managing the add stream. I'm not keen to learn all that stuff but I guess I'm going to have to. I'll probably need to ban particular obnoxious stuff.
What I really hate is video adds and ones which make noise without being ask.
I also hate those bright flashing ones and keep hoping mozilla will add a simple way to kill animations on a page.

I was hoping a few people might use my affiliate link to open bluehost accounts but after 1.1 million page views there hasn't been a single signup.

Anyway my idea is to try a single vertical button/banner and see what happens.
My logic is that so far we've averaged 3000 page views per day (not sure how accurate that is).
If I can get 1/10 of a cent per view that's enough the pay for a dedicated server.
More pays for a managed one - less should still pays for a VPS.

I've signed up for adsense but it could take up to a week to be reviewed.
It was approved very quickly - maybe a hour or two.
16-may-08
I've been reading VPS hosting reviews all afternoon.
One company that has my attention is jaguarpc.com.
They offer reasonable (not super cheap) managed VPS.
They also offer semi-dedicated hosting - sounds like shared hosting with fewer users - this would be a step up front what I have but it is actually dearer than their cheapest VPS.
see vps

Nerdipedia became possible after moving my web-site to bluehost when my previous host screwed up badly.
Bluehost supports fantastico which can be used to install tikiwiki.
Bluehost also makes it incredibly easy to buy and install domains.

Tikiwiki is a CGI application written in PHP.
Tikiwiki uses a mysql database so there is a lot of work for the CPU to do.

Currently we use shared hosting.
There is no danger of running out of disk space or bandwidth quota but should we get hit by the DIGG or Slashdot crowd we are sure to run out of CPU quota and fall down.

{img src="http://nerdipedia.com/show_image.php?id=182"|"link=http://www.bluehost.com/track/eddiem/text1}
Apart from some server load issues I've been impressed enough by Bluehost that I've become an affiliate for the first time ever.